≡
Home
>
Blog
>
Angels or devils
Who is Mieke Mosmuller?

What would happen if we didn't want to wake up for these ideas, if we slept on and on and let the angels do their work without us knowing it?


In the same lecture Steiner describes that the human being - we - have to wake up for this work of the angels. Although there still is time left for this waking up he warns us that we should conceive a part of this working before the beginning of the 21st century - which moment has already passed... If we don't want to realize these threefold human ideals, if we sleep on, it means that we don't participate. Steiner gives the following prophecy:

'I have now given you a general picture of these things. But what would be the outcome if the Angels were obliged to perform this work without the human being himself participating, to carry it out in his etheric and physical body during sleep?

The outcome in the evolution of humanity would unquestionably be threefold. Firstly, something would be engendered in the sleeping human bodies — while the Ego and astral body were not within them — and we would meet with it on waking in the morning ... but then it would become instinct instead of conscious spiritual activity and therefore baleful. It is so indeed: certain instinctive knowledge that will arise in human nature, instinctive knowledge connected with the mystery of birth and conception, with sexual life as a whole, threatens to become baleful if the danger of which I have spoken takes effect. Certain Angels would then themselves undergo a change  [...] This much can certainly be said: The effect in the evolution of humanity would be that certain instincts connected with the sexual life would arise in a pernicious form instead of wholesomely, in clear waking consciousness. These instincts would not be mere aberrations but would pass over into and configure the social life, would above all prevent the human being — through what would then enter their blood as the effect of the sexual life — from unfolding brotherhood in any form whatever on the earth, and would rather induce them to rebel against it. This would be a matter of instinct.

So the crucial point lies ahead when either the path to the right can be taken — but that demands wakefulness — or the path to the left, which permits of sleep. But in that case instincts come on the scene — instincts of a fearful kind.

And what do you suppose the scientific experts will say when such instincts come into evidence? They will say that it is a natural and inevitable development in the evolution of humanity. Light cannot be shed on such matters by natural science, for whether men become angels or devils would be equally capable of explanation by scientific reasoning. Science will say the same in both cases: the later is the outcome of the earlier ... so grand and wise is the interpretation of nature in terms of causality! Natural science will be totally blind to the event of which I have told you, for if men become half devils through their sexual instincts, science will as a matter of course regard this as a natural necessity. Scientifically, then, the matter is simply not capable of explanation, for whatever happens, everything can be explained by science. The fact is that such things can be understood only by spiritual, super-sensible cognition. That is the one aspect.' *

We will read about the other two aspects in the coming weeks. 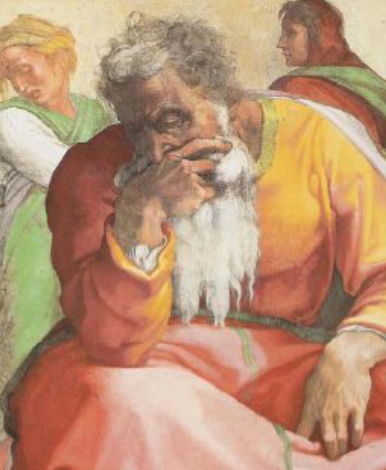 The prophet Jeremiah, worrying about the human being painted by Michelangelo.