In a lecture in 1914 (GA 156, Occult Reading and Occult Hearing) Rudolf Steiner speaks about Manicheism. He says that the power of clairvoyance diminished in the period after the Mystery of Golgotha, and while diminishing it became ever more difficult to see the full significance of this mystery and the full being of Christ himself. Knowing him in his full glory would mean knowing him as a cosmic divine celestial being.

Then Rudolf Steiner says of Mani that it was clear that he also could not reach the full glory of Christ any more, although his teachings were great, magnificent. Mani still had an old clairvoyance, therefore his teachings were much more spiritual than those of the Church fathers. But he couldn't see that Christ incarnated in his full glory into the flesh, he saw that he lived in a kind of etheric form on earth. The struggle to understand this full incarnation still had to begin in those times. Mani had the deep question: How can evil be understood in its relation to the good that is divine? Mani had very profound insights into the answer to this question, but - says Rudolf Steiner - the true insight into evil can only be achieved by seeing evil in relation to the Mystery of Golgotha, as Mani tried.

But those profound beings like Mani had to struggle with an old clairvoyance that could not be brought into a relationship to Golgotha, to Christ having been on earth.
'We just have to think about this great teacher from the Occident, the holy Augustine. Before he had come to the Christianity of St. Paul, he had been devoted to Manicheism. He was much more impressed by the vision of how the divine helper had descended from heaven from aeon to aeon. This spiritual seeing outshone for Augustine the knowledge about how Christ could have lived in a carnal body on earth, and how with him the riddle of evil could be solved. It is moving to see how Augustine speaks with the bishop of the Manicheans Faustus and only because this bishop cannot impress him, he turns away from Manicheism and turns to the Pauline Christianity.’

In the book 'Contra Faustum' Augustine writes as follows and we can see clearly, what Rudolf Steiner meant:

Faustus objects to the incarnation of God on the ground that the evangelists are at variance with each other, and that incarnation is unsuitable to deity. Augustine attempts to remove the critical and theological difficulties.

1. Faustus said: Do I believe in the incarnation? For my part, this is the very thing I long tried to persuade myself of, that God was born; but the discrepancy in the genealogies of Luke and Matthew stumbled me, as I knew not which to follow. For I thought it might happen that, from not being omniscient, I might take the true for false, and the false for true. So, in despair of settling this dispute, I betook myself to Mark and John, two authorities still, and evangelists as much as the others. I approved with good reason of the beginning of Mark and John, for they have nothing of David, or Mary, or Joseph. John says, "In the beginning was the Word, and the Word was with God, and the Word was God," meaning Christ. Mark says, "The gospel of Jesus Christ, the Son of God," as if correcting Matthew, who calls him the Son of David. Perhaps, however, the Jesus of Matthew is a different person from the Jesus of Mark. This is my reason for not believing in the birth of Christ.

Remove this difficulty, if you can, by harmonizing the accounts, and I am ready to yield. In any case, however, it is hardly consistent to believe that God, the God of Christians, was born from the womb.

2. Augustine replied: Had you read the Gospel with care, and inquired into those places where you found opposition, instead of rashly condemning them, you would have seen that the recognition of the authority of the evangelists by so many learned men all over the world, in spite of this most obvious discrepancy, proves that there is more in it than appears at first sight. Any one can see, as well as you, that the ancestors of Christ in Matthew and Luke are different; while Joseph appears in both, at the end in Matthew and at the beginning in Luke. Joseph, it is plain, might be called the father of Christ, on account of his being in a certain sense the husband of the mother of Christ; and so his name, as the male representative, appears at the beginning or end of the genealogies. Any one can see as well as you that Joseph has one father in Matthew and another in Luke, and so with the grandfather and with all the rest up to David. Did all the able and learned men, not many Latin writers certainly, but innumerable Greek, who have examined most attentively the sacred Scriptures, overlook this manifest difference? Of course they saw it. No one can help seeing it. But with a due regard to the high authority of Scripture, they believed that there was something here which would be given to those that ask, and denied to those that snarl; would be found by those that seek, and taken away from those that criticise; would be open to those that knock, and shut against those that contradict. They asked, sought, and knocked; they received, found, and entered in.
....
Here we can see how Faustus, the Manichean bishop, is not able to represent the profound teachings of Mani anymore, and how Augustine, with a fading clairvoyance, starts to wrestle with the question about the incarnation of Christ. And he gives a lecture about how to handle contradictions, if we can't understand them. In anthroposophy we find the solution of this riddle of the incarnation of Christ. Then we can say that they are both right, in a way! 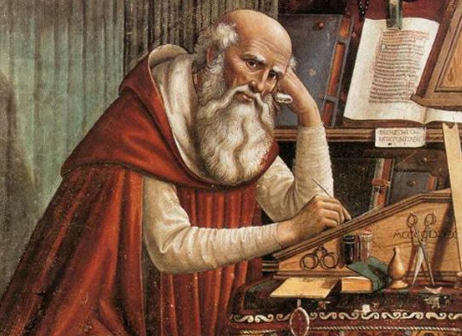