≡
Home
>
Blog
>
Creation Out of Nothing
Who is Mieke Mosmuller?

Creation Out of Nothing

The next lecture was on April 9th in Freiburg(D). A year ago I had given a seminar on this theme in Zurich, and it became a booklet. In Freiburg I spoke again about this topic.

"Rudolf Steiner describes this creation out of nothing in such a way that everything that we recognize through logical thinking and that goes beyond the necessary knowledge actually is a creation out of nothing. He gives the example that something has been stolen and one has an idea about who the thief is. One can remain entirely in the given thoughts, but one can also actively form thoughts about how everything has happened, and that goes beyond necessity, one does not need to do that. There are, of course, beautiful examples in literature. Perhaps you know Sherlock Holmes, a private detective in English literature (Sir Arthur Conan Doyle), who uses his active thinking excellently to solve crimes. He always goes beyond what is necessary. The police work in all that they have learned and what is known as necessary, but Holmes has a free thinking and goes with his thinking far beyond all this and finds the solution in that 'beyond'. One can say that it is banal literature, but it is not; it is very instructive to experience the contrast between someone who is in common things and thinks, and someone who steps out and then thinks out of an overview all kinds of possible thoughts that are not so common." 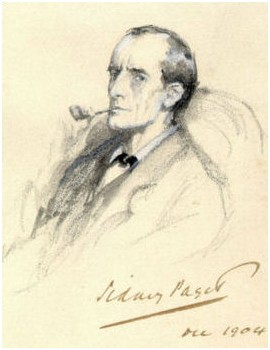