≡
Home
>
Blog
>
Look at the angels, weaving images in our souls!
Who is Mieke Mosmuller?

Look at the angels, weaving images in our souls!

In his prophecy about the near future Steiner gave three warnings about what will happen if we remain asleep to the work of the angels in our astral body. In the first he described were the changes in the area of the will, through which not brotherhood but a fight between people would arise, one human being against another human being. Not love but hatred would become the leading principle.


The second aspect concerns the feeling range of the soul. Here we should cultivate a capacity to see the spiritual being in our fellow man. If we don't see this spiritual being anymore, our fellow becomes a mere physical body, and that has serious consequences for the care of the human body.  In recent weeks I have been describing this aspect of the human being's pure feeling that also concerns thinking, by forming its foundation.
The third aspect I will discuss later.

Rudolf Steiner:
'The second aspect is that from this work which involves changes affecting the Angels themselves, still another result accrues for humanity: instinctive knowledge of certain medicaments — but knowledge of a baleful kind!
Everything connected with medicine will make a great advance in the materialistic sense. Men will acquire instinctive insights into the medicinal properties of certain substances and certain treatments — and thereby do terrible harm. But the harm will be called useful. A sick man will be called healthy, for it will be perceived that the particular treatment applied leads to something pleasing. People will actually like things that make the human being — in a certain direction — unhealthy.
Knowledge of the medicinal effects of certain processes and treatments will be enhanced, but this will lead into very baleful channels. For man will come to know through certain instincts, what kind of illnesses can be induced by particular substances and treatments. And it will then be possible for him either to bring about or not to bring about illnesses, entirely as suits his egotistical purposes. '
GA 182, The Work of the Angels In Man's Astral Body.

The extent to which this is becoming a reality is a theme that I will not deal with here. The reader can see and judge for himself. Many people will reject this totally, others will doubt, still others will recognize some symptoms of this 'illness' in modern medicine... 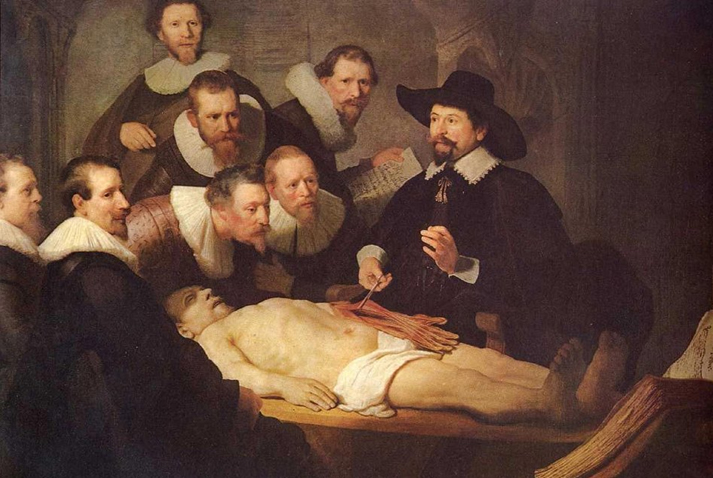 Rembrandt, Anatomy of Dr. Tulp
A science of the dead body.

(Publication of 28-10-2015)
Look at the angels, weaving images in our souls! by Mieke Mosmuller
Comments