On the 8th of April a lecture with the title Nuclear Power and Christ Consciousness took place in Freiburg. In the past, I have studied this topic extensively for seminars in Hamburg and Werkhoven, so it was possible for me to summarize the essentials in one evening - as far as I can judge. Of course, it is certainly not possible to present this in a short summary here. But it is important that we learn to understand that even the unspeakable decomposing power of nuclear energy - apart from an explosion of course - cannot influence us if we make the actual connection with the above-mentioned consciousness.


A good example is the church with the priest and the faithful people in the radioactively contaminated area of Chernobyl. This area would be uninhabitable for 20,000 years, and it would take that long for the radioactive radiation there to drop to harmless levels. In the meantime, however, a religious community has settled in Chernobyl, in the middle of the dangerous zone, in which people, thanks to their firm faith and trust in the Redeemer, die from the consequences of illness and old age and not from the consequences of radiation damage.


''Whoever is in the zone, says Father Nikolaj, is on the verge of death. He is afraid. He thinks about dying, about afterwards, about eternity. So God enters his life. When people enter the zone, you can see from the outside how it works in them.

The people who visited Father Nikolai in church soon began to ask questions. What about us, father? Why did all this happen? Is God punishing us? Will he forgive us? And when we die, is it true that our souls live on?
In the zone, Father Nikolaj says, there is not one non-believer today.

Some say that life outside the Zone is more dangerous than here, within. Many emigrants suffer from diseases for which scientists have no name. Stress, the doctors say, migration-related stress, Chernobyl stress. Many have died from this stress, from heart stories, lung stories, blood stories, head stories.
We, on the other hand, says Father Nikolaj, we here in the Zone are in good health, God the Almighty is praised. The old people in the abandoned villages are dying, but they are dying of old age, not of disease.

They even drink the water. The water from the river that flows past the power station. We bless it, Father Nikolaj says, then we drink it. He crosses the snow-covered ice band of Pripyat, in the name of the Father, he whispers, of the Son, of the Holy Spirit.
One must believe, says Father Nikolai. Whoever believes, nothing happens to him.

Today, on the Day of Resurrection, Father Nikolai will sing the Orthodox Easter liturgy.
Christ is risen from the dead. He conquered death by death and gave life to those in the tomb.
All night long and until dawn, Father Nikolai will stand in front of the icon and call: Christ is risen!
And a thin but audible choir will answer him: Truly, he is risen!

Two days later, on April 26 at 1:23 a.m., Father Nikolai will ring the mourning bell in the churchyard, which he does every year. 25 bells will ring through the zone, one for each year that has passed.
The scientists say that 20,000 years must pass before people can return to the zone. When the bell stops, it will only be 19,975 years. 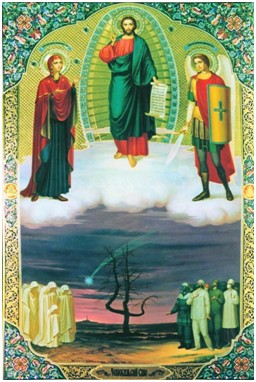 Our Saviour of Chernobyl, 2003.Nuclear Power and Christ Consciousness by Mieke Mosmuller
Comments