In philosophy the existence of pure thinking is being doubted for a long time. In earlier times philosophers believed that there is a 'prima philosophia', a possibility for the human being to think in a right and true way, completely without being influenced by personal thoughts. We could also say: it was not a belief, it was a skill, or an experience. Because personality has come up so strongly this skill of pure thinking, of prima philosophia, got lost and of course a modern thinker doesn't find this anymore.

In the time of idealism, the period of the French revolution and of Fichte and Hegel, the certainty about the existence of this pure thinking grew up once more with a strong power - just to fade away afterwards as it seems.

Nietzsche seems to have felt as though torn to pieces, on the one hand because the rational thinking - for which he made Socrates responsible - spoiled all human faculties of artistic being; on the other hand because he had to reject Christianity for its untruthfulness - in its ecclesiastical forms. So he rejected Reason and he rejected Christ - and had nothing left at all, just his criticism stayed with him.


In the same period a kind of resurrection of pure thinking occurred. Steiner wrote his first books in a form of thinking that we really have to call: pure thinking. If we take the words 'pure thinking' for what they say, pure thinking is thinking - and nothing else. No perception with the senses in it, no memories, no associative thoughts, but a thinking in concepts that is formed in a logical way and guided by reason. It is a thinking free from sensual impressions, initiated by the thinker himself, every concept is formed willingly. Why should we want to develop a pure thinking? Because here we immediately find a spiritual thinking. It is not a theory, we can really feel that the body doesn't speak anymore, that it is the spirit that thinks, without any perception of the body. We need no philosophical, no scientific theories to prove that spirit exists - it has become an experience.


The exciting thing now is that we have found the spirit through thinking and not by having to make it be quiet. We discover that as soon as we start thinking without being forced to it by anything or anyone, we develop pure thoughts that free us from our body.

But pure thinking is not only a thinking that has to be developed by trying hard. It is there always, in all of us. The point is to find it - and when we have found it to recognize it as completely as possible so that we can learn to live in it.

'There are people who deny the existence of such thoughts. They believe that no thought is possible that is not extracted from perceptions or from the inner life dependent on the body. For them, all thoughts are to a certain extent mere reflections of perceptions and of inner experiences. This view, however, can be expressed only by those who have never raised themselves to the faculty of experiencing with their souls a self-sustaining life in pure thought. For others, who have lived through this experience, it is a matter of knowledge that wherever thought dominates the life of the soul to the degree that this thought permeates other soul functions, the human being is involved in an activity in whose origin his body has no share. In the ordinary life of the soul, thought is almost always mixed with other functions: perception, feeling, willing and so forth. These other functions are effectuated by the body; yet thought plays into them, and to the degree that it does this a process takes place, in and through the human being, in which his body has no share.' Rudolf Steiner, Appendix in 'Knowledge of the higher Worlds', GA 10. 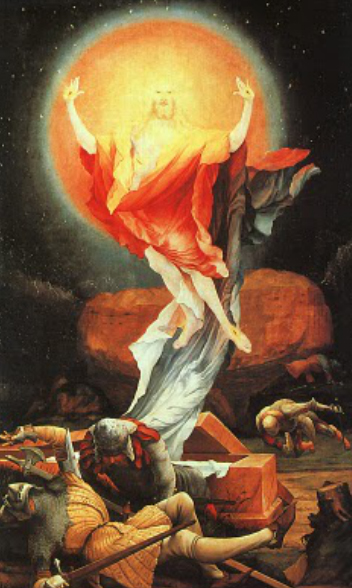 Matthias Grünewald: Isenheimer Altar (Colmar)
Resurrection as an image for the development of a conscious pure thinking.Pure Thinking by Mieke Mosmuller
Comments