The uninvited guest who comes in drunk and after the guest meal is Alcibiades. He complains about Socrates, but also praises him in all the keys. He complains about the fact that Socrates could in no way be seduced into a physical love game, as a result of which Alcibiades became the rejected lover... But he also describes him in all his glory during a joint war campaign as follows:


'It is very worthwhile to keep an eye on Socrates during the flight, like in Delion. As it happens, I had a horse at my disposal at the time. In great disarray, the soldiers withdrew. He was on foot with Laches and in full pack. As soon as I saw and reached them, I of course made it clear to them that they had nothing to worry about and that I wouldn't let them down. Then Socrates actually showed me an even stronger example than in Potidaia. I had nothing to be afraid of on horseback. To begin with, he was greater than Laches in determination. Then, to quote you, Aristophanes, it seemed to me that he was walking there in the same way as here 'with firm step and eyes on all sides'; he quietly kept an eye on the movements of friend and foe and it was obvious to everyone that things would end badly with whoever would venture too close to him. That's how he got his mates off unharmed. Because most of the time the enemy doesn't grab people who have such an attitude, they prefer to grab those who flee head over heels.

Later there come more guests, people drink, many sleep in the place, only Socrates stays awake with Agathoon and Aristophanes. They drink from the same cup and Socrates keeps the conversation going, claiming that a comedy-poet should also be able to write a tragedy and a tragedy-poet a comedy. The other two fall asleep and finally:

'Socrates covered them, stood up and, as usual in the company of Aristodemos, went to the lyceum where he took a bath, and then spent the day as he was used to doing, and rested at home in the evening. 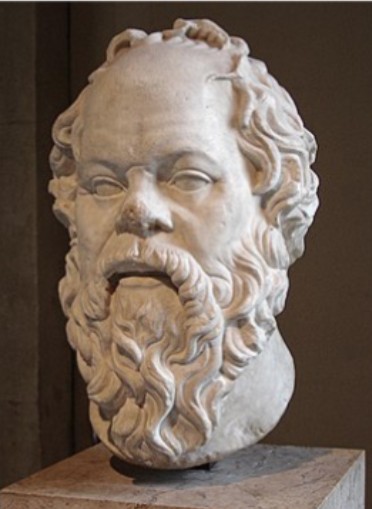