Ita Wegman, who wrote down her memories of the event in her notebook in 1935:

'You saw Dr. Steiner everywhere then; he was soon on the site, which he crossed in all directions, then he was in the carpentry workshop (Schreinerei), always with a deeply sad and earnest expression without excitement, fully aware of what was being lost for mankind in the destruction of this work. The building was unique and carried the entire development of the world and of mankind in its forms and images. To be inside this building meant, for every person sensitive to it,  a stirring of the deepest grounds of his creating power.

Because of its forms both internal and external, because of its frescoes and  ceiling paintings, its window paintings, and its columns that were made of different kinds of wood, with such meaningful sculptures on the capitals, this building was a landmark for man, above all for those who could understand what they were looking at.

In the building the signs of the secrets of the past, present and future were hidden, but nevertheless public, because everyone could see them.

That is why it is an unforgettable experience for those souls who had the good fortune to be able to spend time in the building. In one night the long work of ten years had been destroyed. Dr. Steiner stood before the ruins of the building once more at eight o'clock in the morning; it was still burning and smoking. Most people went home, the site was empty, while faithful souls cleared out the atelier, and prepared the carpentry workshop once more for work.

Alone he stood there and endured the destruction. I dared to come close to him with humility and could only say the words: ‘It is terrible for us’. ‘Yes, he said, 'now everything is written up in the world ether.' (Notebook 74) 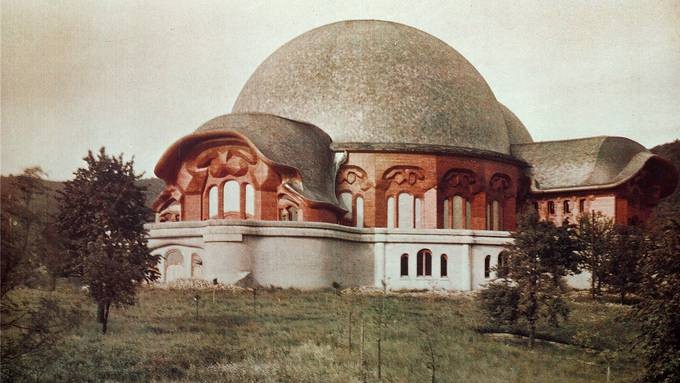