â‰ˇ
Home
>
Blog
>
The work of the Angels in our Soul
Who is Mieke Mosmuller?

The work of the Angels in our Soul

This time I quote Rudolf Steiner, from a lecture in GA 182. In this lecture the threefold ideal of the human being is given, and with the clairvoyant thinking it is seen where this ideal has its origin.Â  I have made some small textual adjustments to assist contemporary readers.

'The Angels form pictures in our astral body and these pictures are accessible to thinking that has become clairvoyant. If we are able to scrutinise these pictures, it becomes evident that they are woven in accordance with quite definite impulses and principles. Forces for the future evolution of mankind are contained in them. If we watch the Angels carrying out this work of theirs â€” strange as it sounds, one has to express it in this way â€” it is clear that they have a very definite plan for the future configuration of social life on earth; their aim is to engender in the astral bodies of human beings such pictures as will bring about definite conditions in the social life of the future.

People may shy away from the notion that Angels want to call forth in them ideals for the future, but it is so all the same. And indeed in forming these pictures the Angels work on a definite principle, namely, that in the future no human being is to find peace in the enjoyment of happiness if others beside him are unhappy. An impulse of Brotherhood in the absolute sense, unification of the human race in Brotherhood rightly understood â€” this is to be the governing principle of the social conditions in physical existence.

That is the one principle in accordance with which the Angels form the pictures in our astral body.


But there is a second impulse in the work of the Angels. The Angels have certain objectives in view, not only in connection with the outer social life but also with man's life of soul. Through the pictures they inculcate into the astral body their aim is that in future time every human being shall see in each and all of his fellows a hidden divinity.


Quite clearly, then, according to the intention underlying the work of the Angels, things are to be very different in future. Neither in theory nor in practice shall we look only at the human being's physical qualities, regarding him as a more highly developed animal, but we must confront every human being with the full realisation that in him/her something is revealing itself from the divine foundations of the world, revealing itself through flesh and blood. To conceive the human being as a picture revealed from the spiritual world, to conceive this with all the earnestness, all the strength and all the insight at our command â€” this is the impulse laid by the Angels into the pictures.

Once this is fulfilled, there will be a very definite consequence. The basis of all free religious feeling that will unfold in humanity in the future will be the acknowledgment, not merely in theory but in actual practice, that every human being is made in the likeness of the Godhead. When that time comes there will be no need for any religious coercion; for then every meeting between one person and another will of itself be in the nature of a religious rite, a sacrament, and nobody will need a special Church with institutions on the physical plane to sustain the religious life. If the Church understands itself truly, its one aim must be to render itself unnecessary on the physical plane, as the whole of life becomes the expression of the super-sensible.

The bestowal on humanity of complete freedom in the religious life â€” this underlies the impulses, at least, of the work of the Angels.
And there is a third objective: To make it possible for us to reach the Spirit through thinking, to cross the abyss and through thinking to experience the reality of the Spirit.

Spiritual Science for the spirit, freedom of religious life for the soul, brotherhood for the bodily life â€” this resounds like cosmic music through the work wrought by the Angels in our astral bodies.

All that is necessary is to raise our consciousness to a different level and we shall feel ourselves transported to this wonderful site of the work done by the Angels in the human astral body.

We are living in the age of the Spiritual Soul, and in this age the Angels work in the astral bodies of men as I have described. We must gradually come to understand this in our wideawake consciousness. It is part of the process of human evolution itself. ' 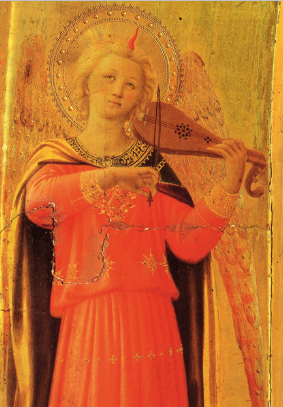