≡
Home
>
Blog
>
Thinking without the brain
Who is Mieke Mosmuller?

Thinking without the brain

When we look back to Krishna, Zarathustra, Adam Kadmon, we can see the images that point to an original ideal human being, who is ideal and original at the same time, and who has a perfect outer and inner shape. We can see it as a great cosmic example which was there in the beginning and can be there in the future again. The I is not created to remain this limited, selfish being that is held by three layers that confine it forever: the physical, the ethereal and the astral bodies. As soon as it can become its true being, it develops its great cosmic shape. We see this in the different religions in different imaginations.

'Religion' of our time, which is natural science, has no better image than the DNA, this spectrum of the human being. When one tries to experience this image, one feels the 'Weltschmerz' because of an era that is so confined and still thinks so much of itself. If we really had to believe that the superb being of the objective I was fully explained by something like the spectrum of the DNA, we could only become desperate...

The human stature, the physical body, is the true image of the objective I. The grandeur of the brain, the central nerve system, points to the grandeur of the human I. Artificial intelligence struggles to equal this eminence.

In anatomy books we can see the brain drawn as a 'grey mass', with a white marrow. We can see wonderful windings that don't match any mathematical laws. It is like a labyrinth . There is an extensive knowledge about all the localizations of the functions. Still, when we immerse ourselves in this knowledge, we experience how poor it actually is. I don't mean that science hasn't come far in gaining knowledge. I mean that the most important human disposition is not acknowledged.

It seems to be impossible to give this disposition a name, because immediately all kinds of religious and philosophical notions and prejudices arise - that are certainly meant here, but which should be considered in a far more concrete way than usual.

Man can learn to think without the brain being active. That this is true is an immediate experience for the one who can think that way. One needs no proof for that - although one would like to find proof, to be able to convince others... It is the greatest discovery one can make. For it gives absolute proof that the human being is immortal. From the moment one experiences this, the whole world could shout that it is pure nonsense - and it still would not overturn ones conviction. One would see it as poor self-knowledge. Man is locked up in 'Plato's cave', and has forgotten that there is a world outside the cave. The one that can escape knows how the true world is, but if he comes back to his former fellow-prisoners they mostly don't want to hear a single word about this true world - let alone that they would want to be liberated... 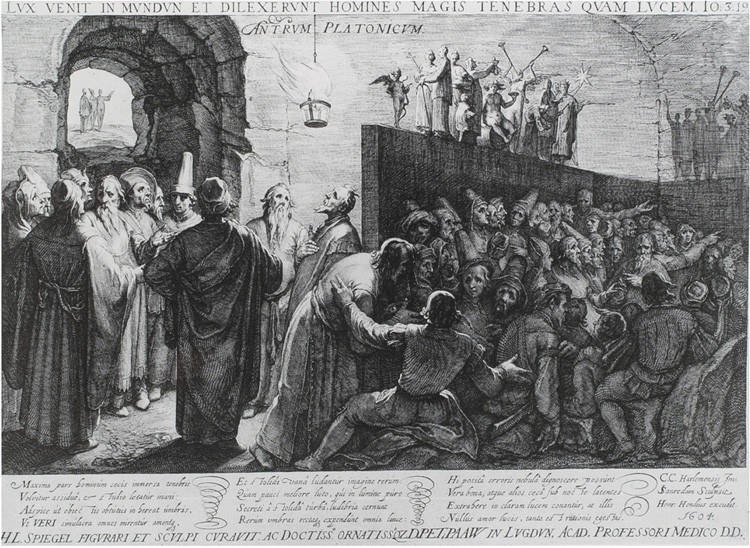 Plato's Allegory of the Cave by Jan Saenredam, according to Cornelis van Haarlem, 1604,Albertina, Vienna

Thinking without the brain by Mieke Mosmuller
Comments