Rudolf Steiner:
'The I is freely able to become active of itself, and therefore it can also produce the category of cognition through self-determination; in the rest of the world, by objective necessity the categories are connected with the given corresponding to them. It must be the task of ethics and metaphysics to investigate the nature of this free self-determination, on the basis of our theory of knowledge. These sciences will also have to discuss whether the I is able to objectify ideas other than those of cognition. The present discussion shows that the I is free when it cognizes, when it objectifies the ideas of cognition. For when the directly given and the thought-form belonging to it are united by the I in the process of cognition, then the union of these two elements of reality — which otherwise would forever remain separated in consciousness — can only take place through a free act. (GA 3)

Here the other way to come to the substance, the matter of thinking, is being described. It is not a description of a completed fact, it is a description of a task that every human being could fulfill him/herself. What is the nature of this free self-determination? As a beginning of an answer, I will give one more Quote from Rudolf Steiner:
'Man works on himself by means of a wisdom which is not within him. That wisdom is mightier and more comprehensive than any conscious wisdom of later years. The higher wisdom becomes obscured in the human soul which, in exchange, receives consciousness.

'The higher wisdom works out of the spiritual world deep into the bodily part of man, so that man is able by its means to form his brain out of spirit. It is rightly said that even the wisest may learn from a child, for in the child is working the wisdom which does not pass later into consciousness. Through that wisdom man has something like telephonic connection with the spiritual beings in whose world he lives between death and rebirth. From that world there is something still streaming into the aura of the child, which is, as an individual being, immediately under the guidance of the entire spiritual world to which it belongs. Spiritual forces from that world continue to flow into the child. They cease so to flow at the point of time to which memory goes back. It is these forces which enable the child to bring itself into a definite relation to gravitation. They form the larynx, and so mold the brain that it becomes a living instrument for the expression of thought, feeling, and will.

'What is present in childhood to a supreme degree, so that the individual is then working out of a self which is still in direct connection with higher worlds, continues to some extent even in later years, although the conditions change in the manner indicated above. If at a later stage of life we feel that we did something years before which we are only now able to understand, it is just because we previously let ourselves be guided by higher wisdom, and only after the lapse of years have we attained to an understanding of the reasons for our conduct.


'From all this we can feel that, immediately after birth, we had not escaped so very far from the world in which we were before entering upon physical existence, and that we can never really escape from it wholly. Our share in higher spirituality enters our physical life and accompanies us throughout. We often feel that what is within us is not only a higher self which is gradually being evolved, but is something higher which is there already, and is the motive cause of our so often developing beyond ourselves.


'All ideals and artistic creations which man is able to produce, as well as all the natural healing forces in his own body, by means of which he is continually able to adjust the injuries that befall him in life — all these powers do not proceed from ordinary intellect, but from those deeper forces which in our earliest years are at work on our equilibrium in space, on the formation of our larynx, and on the brain. For these same forces are still at work in man in later years. When sickness attacks us, it is often said that external forces cannot help us, but that our organism must develop the healing powers latent within it; by this is meant that there is a profoundly wise activity present in us. Moreover, it is from this same source that proceed the best forces whereby knowledge of the spiritual world, true clairvoyance; is attained. (GA 15)

We can have a presentiment that the free self-determination of the I is the impregnation, the insemination of the ego-I with the deeper forces that are described here, that the I is being touched by the true being of the I that cannot come along into life on earth, but stands as a spectator from the moment on that we say 'I' to ourselves. 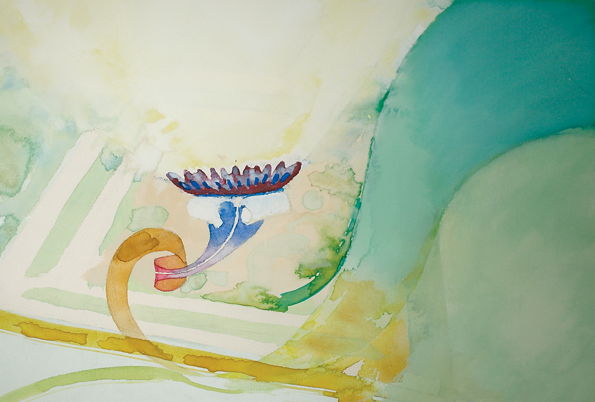