≡
Home
>
Blog
>
Videos
>
Conspiracy thinking or the search for understanding in what seems incomprehensib...
Who is Mieke Mosmuller?

Conspiracy thinking or the search for understanding in what seems incomprehensible

In this corona crisis, in which our society is driven to extremes, we see a phenomenon that is referred to by many as 'conspiracy thinking'. But where the term 'conspiracy thinker' carries a vicious mockery, we can give some homage to this thinker, who seeks the concept behind the incomprehensible phenomena. It is human intelligence which, where we find it unexplained, tries to explain by thinking. But is anyone who thinks about what remains unexplained a 'conspiracy thinker'?Video auf Youtube ansehen 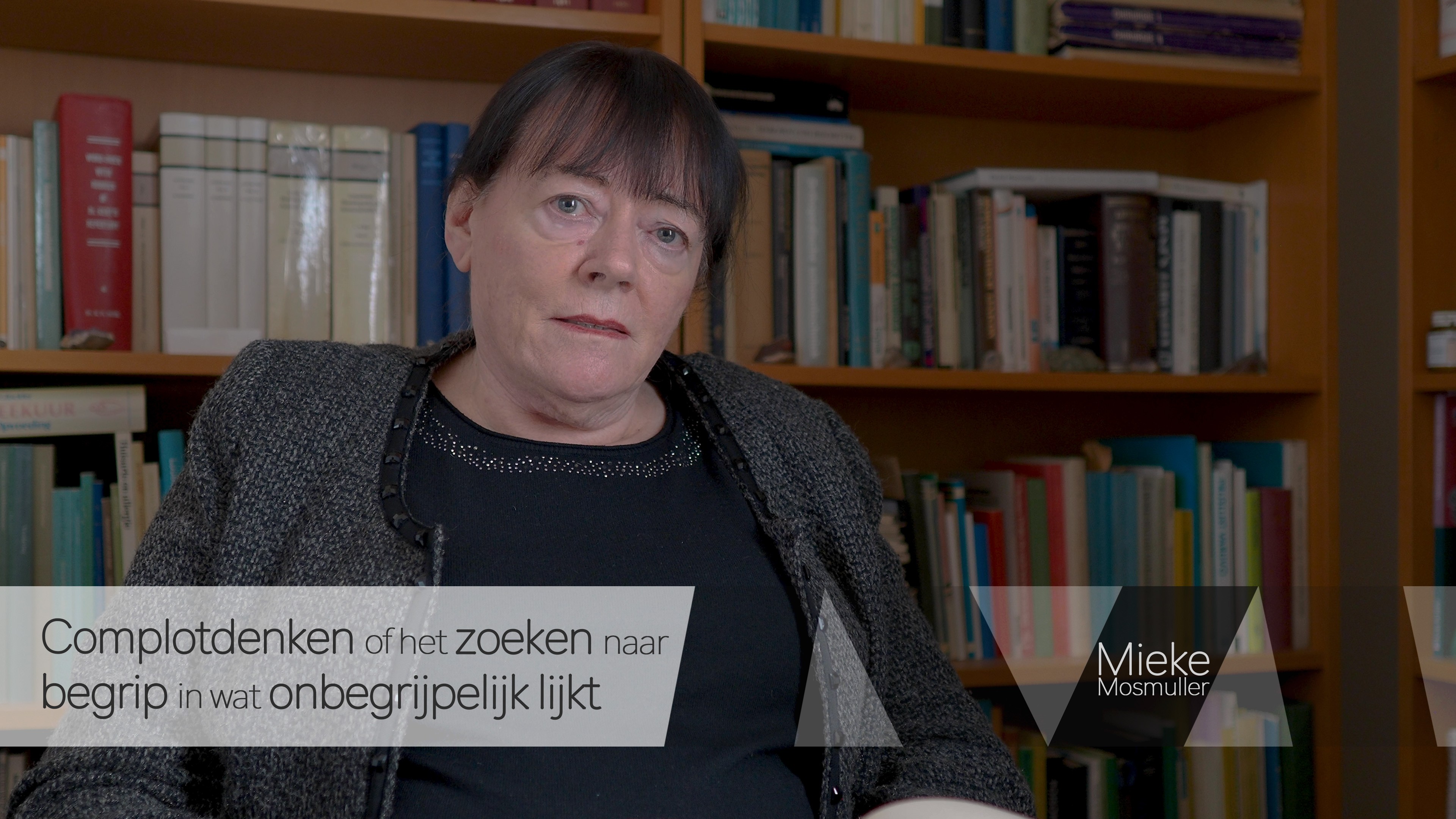 I would have liked to tell a story at Christmas, but certain circumstances made that impossible, but we are still in the Christmas time, so I will weave in a very small story later on. But my theme for today was conspiracy thinking.

And when one starts to think about it, the fact is that - over the last few months, I have tried every time to focus attention on certain incomprehensible facts in the whole corona crisis - and when, as a human being, one does not see certain correlations or when they are bizarre, when one absolutely cannot understand them, then it has to do with human intelligence that one then starts looking for explanations for this lack of coherence. And when you don't, then you are actually a stupid sheep that simply walks in a herd and trusts the shepherd without having exposed him to proper research. Of course, as human beings, we have to investigate him. And if we cannot understand coherence, then I think it is proof of intelligence and of a non-sheep-like being that we are going to ask, yes, what is the coherence, what is behind this? And that is not paranoia, that is a thinking of the true nature of coherences that exist. That is what we need as human beings. And certainly when we are confronted with such serious measures and consequences as there are at the moment, then human intelligence comes up very strongly and starts to ask itself questions. And when it turns out that these questions are not being answered, then, of course, thinking about the underlying causes only becomes more intense and stronger. And one of the deaddoers of our time is that anyone who thinks about the connections behind the phenomena is portrayed as a conspiracy thinker. Of course, there is a kind of gradual scale towards paranoia, which is also a phenomenon where one looks for all kinds of other connections behind things, which are based on an unhealthy intelligence, let me put it this way, but that is the way it is with everything. It is not a question of excesses; it is a question of what the phenomenon means when it is in the middle. That is why I have such admiration and love for the philosophy of Aristotle, because one could call it the philosophy of the middle. He has not listed four cardinal virtues in his teaching on virtue as Plato did, but he actually indicates that virtue can be found where the middle is between extremes. And so a person who searches for concepts behind the incomprehensible phenomena is very humanly intelligent and you cannot just say that everyone who does so is a conspiracy thinker. And that is what is being done. And then I thought, yes actually the most important conspiracy theory in mankind is the story of creation by God. Believers are in fact all conspiracy thinkers and are somewhat ridiculed by the same people who also ridicule the conspiracy thinkers. I don't want to generalise but one often gets such an impression, but creation by God is the most beautiful example of a world of thought that can be grasped behind the phenomena. And I remembered from the days when our children were very young and we told and read a lot of stories, a collection titled "A Star Across the Borders. Stories for Advent, Christmas and Epiphany" and in it there is a very small opening story and I think that is actually a primal image for justified conspiracy thinking.

The title of the story is 'why God created the human being' and it was written by Dan Lindholm.

"God created the world with everything that lives in it, from the tiniest little worm in the dust of the earth to the crowning of creation, the human being. And the angels saw it, and were full of wonder. But one thing they could not understand: why had God created men? They thought deeply and deeply, but it remained a great mystery to them. God did not need people down on the earth, they thought. He had a heaven full of angels. They talked to each other about it and finally they decided to ask God Himself. One of the little angels took courage, stepped before God's throne and asked: heavenly Father, behold, your house is full of big and little angels. Why, then, did you create men? When God heard this, He spoke out loud, "Heavenly Hierarchies, gather yourselves together, and there he bowed down to the earth and plucked a rose that had just opened. Behold, He spoke to the angels. Who can tell me what I have here in my hand? But none of the angels knew what God had in his hand. They stood silently around his throne and they did not know the answer. But God the father spoke, I created the human being so that in the world there is also a creature who knows what God has created".

This beautiful image can guide us in the right thought, the right judgment of that thinking that seeks understanding behind the incomprehensible phenomena. And of course, this is a principle that plays a role in the development of mankind as a whole, and you cannot, of course, say that conspiracies do not exist.

When you look into history, first of all the history of philosophy, in which people are described who have been busy in the outer world, then you immediately find out that conspiracies have existed, always have existed, and that they do not differ that much from what lives in people today. And why shouldn't you look for something of a concept behind incomprehensible phenomena that explains why these phenomena are so incomprehensible? Just think of Socrates. Socrates can perhaps be seen as the first human being who very consciously tried to teach young people and of course older people as well, but that didn't work out so well, but he especially to young people tried to learn how to use their awakening intelligence. And the fact that those young people began to learn this, and thus became empowered, posed a major threat to the government in Athens. In the end, this literally cost Socrates his head. He got a trial, he defended himself there in a wonderful way, as Plato describes it in the Apology, and he ended up drinking the poison cup. We also have his speech in the Phaido, in which he talks to his friends about his imminent death, just before finally drinking the poison cup. You cannot say that this was not a conspiracy, because Socrates did no harm. He proclaimed virtue and morality and he taught young people to listen and reason. And when you get to know his reasoning, there is no harm in that, although he was, of course, very forthright. The fact that he ended up with the death penalty for this is based on a conspiracy.

If you look later, you will find, for example, in Roman history, the Emperor Augustus, when I was at grammar school, we had a beta project, which meant that in the fifth and sixth grades, while following the beta direction, we had a particular project for the classical languages. And we had the project of the death of Socrates and the project of the ascension to the throne of Augustus. And we then studied all the things that preceded Augustus' ascension to the throne in order to bring it to the point where he could eventually become emperor. I have completely forgotten the details, but what I have not forgotten are the conspiracies that were forged there to achieve this goal in the end. And you can be sure that very odd things happened there and that those people who got a suspicion of them were not particularly liked either.

If you look later in history, for example in the time of the Renaissance, you get to know people who lived from conspiracies, and anyone who looks at the history of humanity with an open eye, knows, conspiracies have always been there. And the point is that, as people in our time, in which we are much more conscious in our souls than ever before, and we should still be more conscious, we have to look through these underlying processes. And that that often goes too far - and I certainly would not want to become a supporter of any of the theories, but I would like to face them all and hear and read them so that you know what people who have intelligent questions about what is really going on, those people actually deserve praise and we see the opposite, we see that they are being ridiculed and are being called paranoid personalities. So I would like to make a plea here, now, today, with the story of why God created the human beings in my hand, that we as humanity should look hard for the underlying processes of this corona crisis and the imminent great reset.