The NOS published a report on an article that appeared in the German newspaper ‘Die Welt’ about released emails from March and April 2020 showing that government leaders asked questions to scientists in order to get a mental grip on the situation, which could help to plan measures of a preventive and repressive nature. Raising fears was an important goal. Now that the fear of the coronavirus, or rather the doubt about it, grips us people every day, we must ask ourselves whether we should not arm ourselves better against the information that comes to us. The viral possession prevents us from doing what we, human beings really have to do.Watch video on YouTube 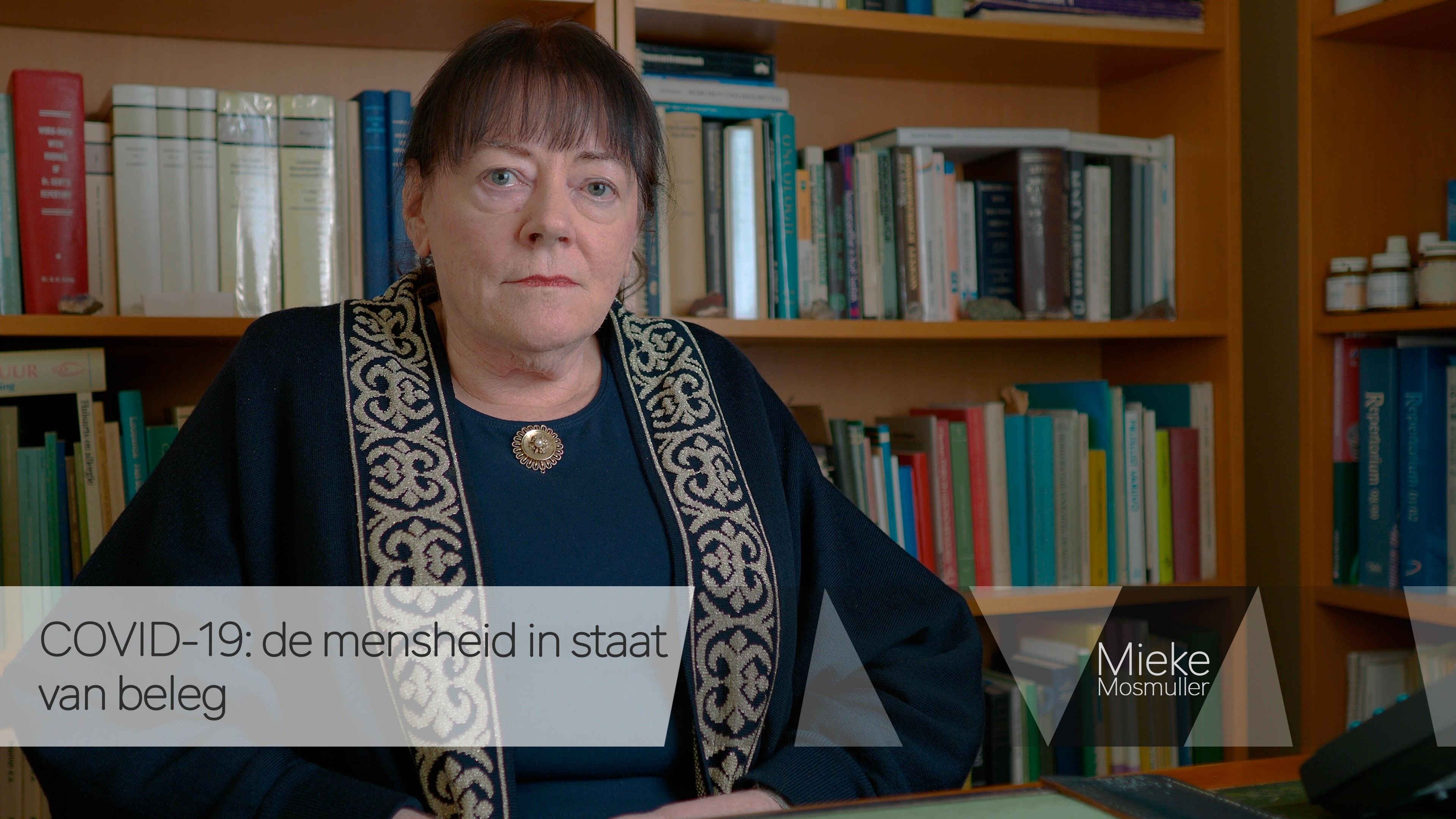 Yesterday, there was a report on nos.nl that the German newspaper, or magazine, I believe it is a newspaper, Die Welt, published an article about released e-mails dating from March and April 2020, and it appears from this e-mail correspondence between various government leaders and scientists that certain questions were put to science and subsequently answered. I will read out what was in that NOS report, bits and pieces.

Certain research institutes were asked for a worst-case scenario, to get a mental and planned grip on the situation. That could help in planning measures of a preventive and repressive nature. The scientists provided plenty of suggestions, including proposals, to put fear and docility in the population on the agenda. Writes Die Welt. There is a link to the article, but unfortunately one must be a subscriber so one can only read one paragraph.

For example, campaigns could be used with images of people dying in respiratory distress because there are no ICU beds available. It is striking that scientists negotiated among themselves about the death rate that should be mentioned. The RKI, Robert Koch Institute, suggested using an estimate of 0.56% of the people infected, but an employee of the RWI, an influential economic research institute, argued in favour of a mortality rate of 1.2%. For the worst case scenario, the percentage eventually used was indeed the one suggested by the RWI. If the government does not intervene, 70% of the population could be infected and more than one million people could die, the minister of the interior, Seehofer, warned several times at the time.

This is, of course, an world-shaking news item and it is to be expected that it will hardly make the news, it seems like a mistake that this has made it into the news, a major newspaper like NRC does not mention it, but this is, of course, real world news. For example, there was another report like this in June, when I read it, I also thought: well, this is world news and this is where the whole thing ends. It was a report from the University of Barcelona, which had investigated waste water, samples from, let's see, March 2019, and COVID-19 was found in those samples. As far as I'm concerned, that is earth-shattering news, because that would mean that the virus had been in the wastewater for three quarters of a year or so, and it only enters wastewater if there are infected people, so it was going on long before this pandemic became conscious and apparently nobody noticed. But what is the subsequent reaction to this? People say, well, they must be false positive tests. Well, then, this time they are false positives. I just want to highlight that to show how world news is treated these days. For example, there was an article in the Dutch newspaper nrc at the weekend about the fact that members of parliament receive letters from what are then called citizens, which are people like us, and these people write to the members of parliament that they are desperate and that they really don't know how to continue. This is followed by various responses from members of parliament. When you read this, you think: this must stop immediately. This disaster that is taking place here socially is sustained by a disaster that perhaps could come. But if you see what a social disaster is going on, so that people are writing to MPs to place their distress before them, then you would say this must stop immediately. But it doesn't stop. And every time, I have a reflection on this, a consideration. I believe that it is very necessary that we, as human beings, keep in mind that we are really human beings. People gifted with reason, with the ability to create art, and with a conscience. We must progressively make the positive view of being human so strong that the other side is actually dwarfed by it. That is my opinion. I don't believe that man is a creature prone to all evil. And incapable of any good. That is a Bible statement that belongs to the Old Testament. In the New Testament you really have to turn this around. You have to say: the human being is incapable of evil and inclined to goodness. And the fact that this is not the case has to do with the fact that there are other forces at work than the purely human. Of course, we are dealing with a view of humankind in which man is seen as, let me put it bluntly, an animal, gifted with ingenuity. And when you see man as such, as an animal gifted with ingenuity, then that herd has to be kept in check. And how do you do that? Who is to do that? You have to assume that the leaders of the herd are the most beastly, because they have to keep things under control. I took in images like that as a child, as a young adult, because I lived in Amsterdam and we didn't have a television at home, we didn't want that, but my mother would take me to the Cineac once in a while. And in the Cineac there was a continuous programme. News items, variety shows, but especially nature films. And there I absorbed a lot of images of what goes on in the animal kingdom, how the leader of a species in a certain area demarcates that area with his instinctive power and prevents other elements from entering or being able to rule it, and how certain species devour other species on the basis of their instinct.

If you want to see the human being in this way, you can do so, but I do not see it like that, that is not the human being, that is a low part which is present in the human being but which is transcended by the higher, by reason, by the sensitivity to beauty and the deeply felt conscience, and that is how I want to see the human being. And even though in the outer world you may see more of that beastly creature appearing at the moment, which is not a human being, you should, I think, as a human being, really reflect with all your might on what you are as a human being. Once we spoke of faith, love and hope. At the moment we can only speak of the virus. When it comes to love, people know better from each other or for each other what is good than to leave it to the people themselves. And hope has shrunk to the hope of a vaccine. We are in a state of siege as humanity. And the besieger is a virus. Nobody has ever seen it, but it has an effect. And the effect is that we have entrenched ourselves behind the city walls, we have filled up the canals, we have lifted the bridges, we have put the barrels of black tar on the walls and we do not realise that the besieging virus is with us, inside the city walls, always. Of course, we are dealing with an agent, with something that is bothering us, that is part of nature, of living nature, that cannot be escaped. You cannot close the borders to the air with a barrier. Apparently you can for the mobile phone network, but you really cannot for the air. This air is flowing all over the world and you can see this - we saw it again recently, for example - when in a storm the sand from the Sahara falls down as far as Switzerland. What do you think you can do to stop the air? And we know, the virus is mostly in the air. We can entrench ourselves, but we are not able to protect ourselves against the laws of nature in such a way that you can even erect a barrier to the air. And you can retreat into your house, you can close your schools, you can lock everything up, but the air continues to flow. In any case, our consciousness is infected by the virus, if we have not become ill, if we have not got a lung disease, then at least we have a possession in consciousness with the virus. It is the topic of the day. We really have to make an effort to remember that life is actually something quite different. And I think it's time we started doing that. Of course we have to stay awake to everything that is going on, and a cultivation of the virus in consciousness is inevitable, but we can put other thoughts and feelings into that. Think about the music, for example. When you look at a top violinist, or a top pianist, and you see how that which has become an art form through years of practice, how with such a top musician the heart lives in the fingers. You can see that, and you can hear that a composer such as Frederic Chopin, the composer of Ballade in G minor for piano, listen to it and realise that a human being has written it down in notes. What on earth is a virus compared to that? That is what I want to call out to you, let us stop this viral possession and let us remember that in us lives the true light that gives light to everyone. That is why we are human. And when more and more of us remember that, then the whole edifice of the virus collapses.