≡
Home
>
Blog
>
Videos
>
Future predictions abound, but the past seems to have to be swept away
Who is Mieke Mosmuller?

Future predictions abound, but the past seems to have to be swept away

Because of everything that has happened in the past year, we seem to lose our attention to the daily figures and measures that the state imposes on us. Alongside the multitude of predictions for the future, it sometimes seems that our traditions from the past must be forgotten, wiped out, as if they were never there. Not only by the measures themselves, but also by the attention we pay to the corona crisis itself, we allow this to happen. Let us try to focus on what has shaped us from the past. Starting with Good Friday and Easter, the feast that represents the resurrection! Watch video on YouTube 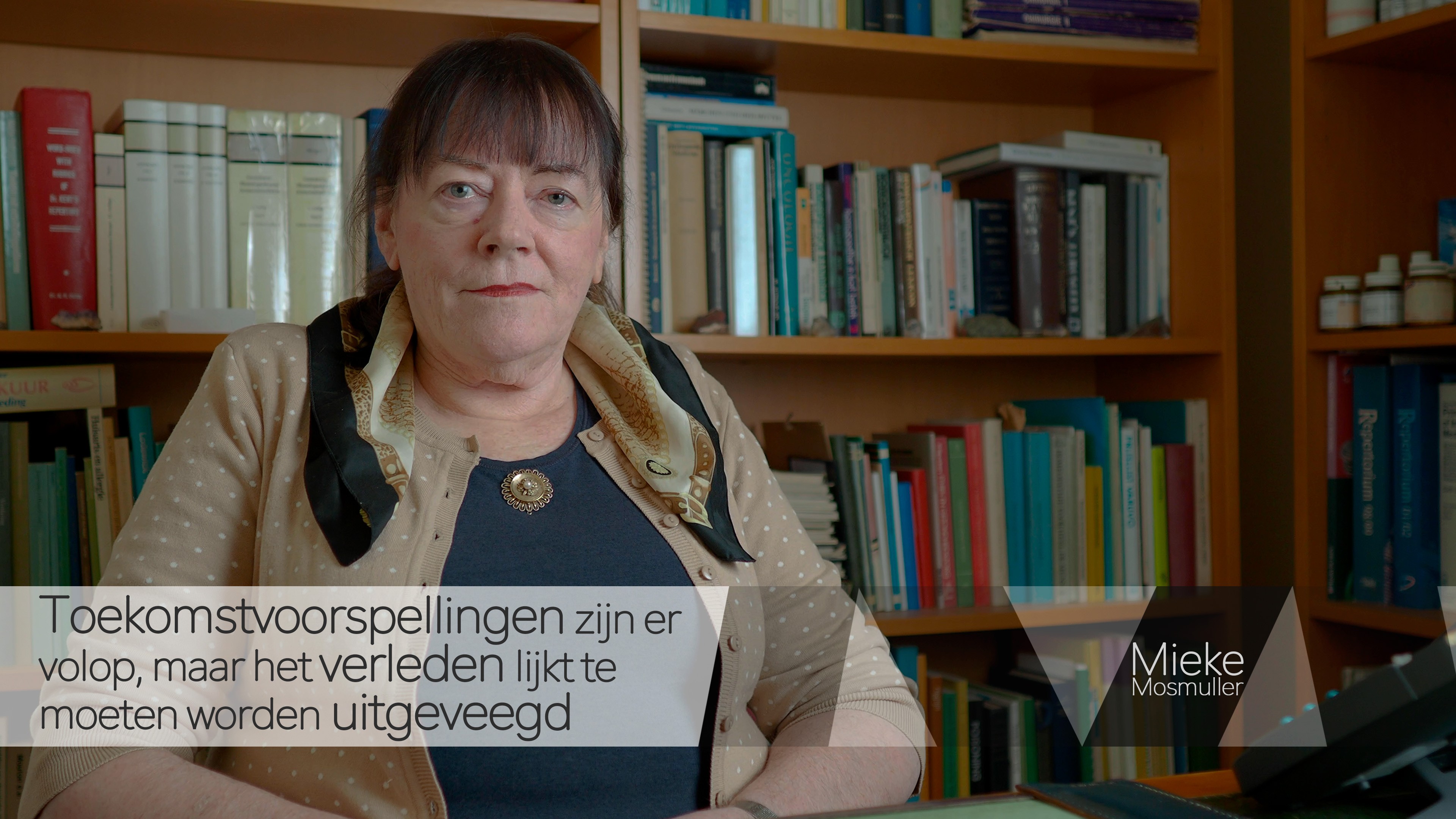 Last week, the Dutch elections were still in the forecast, now they are behind us. Last week, I had the title 'make or break', and the election results turned out in such a way that, in my experience, you could say 'break'. But then, when the verdict, shall we say, is passed, one feels how resilient one is as a human being. I assume that the politicians involved are disappointed, but as a private citizen, I would say that I hardly experienced any disappointment, because of course it is politics and as far as I am concerned the State is only of relative importance. There is, of course, a tendency to change this thoroughly, and I have the impression that we are in a process in which the change of the citizen, the relationship of the citizen to the state should be a different one, is the opinion. You can see that this is the case, because this health crisis, as it is called, which has been going on for more than a year now, makes you feel inclined to follow the news every day. And not only to follow the statistics, but also what is being said about it, and if you have any doubts about it, about the whole thing, then of course you feel a tendency to seek out people who also have that and then you start to pay attention to them. And before you know it, your whole life really consists of corona and more corona, of dangers, of fears, of criticism, of resistance, of demonstrations, of vaccinations, of the consequences of vaccinations and so on. You notice that you can hardly escape this and we have a natural feeling that the state plays a major role in this. The past year has also shown that the state has a certain power to take control of such an epidemic or, whatever, pandemic, and also to link measures to it. The difficulty with this is that one can ask: what does the state actually have to do with this? One might say that it is the health institutions that have to deal with this, but of course we are in the modern age with the possibilities to calculate everything and so mankind calculates himself stupid, with the help of a device, because he cannot do it himself, but he calculates himself stupid and every day we get the numbers and the prognoses and the predictions and the reviews and so on. And now, when I am aware of the resilience in myself that occurs after what one might call a disappointment, then it is precisely this resilience that points out that there is more to life than state and health.

And when one looks back at the past year, one sees that we have lost a great deal of the festive and solemn moments in human life that we had in the past. The annual celebrations, for example. I read in the paper now, because of course I still look in the paper, that in Spain measures have been announced, especially for today, 19 March, the feast of St. Joseph, where people in Catholic countries celebrate, the shops are closed, it is a public holiday - and now this public holiday falls on Friday and what do they fear? That the whole of Madrid will go to the coast and that has to be prevented, so all the regions are closed. The same thing is happening, and has already been announced, with Easter. It is not the intention that people celebrate Easter as they always have done, for example with their more distant relatives, no, they must stay at home and preferably forget all about it. I became intensely aware of that in my resilience. That has not only to do with the fact that we are not allowed to come together with whole families, but it has to do with the fact that our attention is totally distracted from that which comes to us from the past and where we experience our connection with the past. There are plenty of predictions for the future but the past seems to have to be wiped out. Now, I found out to my surprise that in a fortnight time it will be Good Friday. In the past, this time that we are now entering was very strongly coloured - but in a positive way - by all the concerts of passion music by Johann Sebastian Bach. That was, that is, in the Netherlands a very rich tradition that is not only intended for believing Christians, but which music lovers also enjoy attending. That will not happen this year, and it may not have happened last year either (I can't remember exactly). This means that what many people refer to as the time of suffering and Easter cannot be experienced in the way that it actually used to be.

When I was a child, I used to come to my father's family home; they were strict Calvinists and they were not allowed to do anything on Sundays and they were not allowed to listen to the radio and watch television, not even on other days, but there was one day a year when they did. They would turn on the radio and then, on Palm Sunday, the St Matthew Passion would sound from the concert hall. And they would listen to it all afternoon. As a child, I experienced this as an extraordinarily festive and solemn occasion when the more dogmatic rules were actually pushed aside, which I enjoyed as a child, because if I remember correctly, it was always the AVRO (liberal broadcasting association) that broadcast this, and it was actually the case that these people, if they listened to the radio at all, were only allowed to listen to the NCRV (protestant broadcasting association). So these are memories that one has, which on the one hand show how stuck people were in their religious church systems, but on the other hand, there was also a genuine religious or Christian experience that was connected to the Easter celebration. And I would like to appeal to you, people who are watching this: can we not turn on the radio on Palm Sunday (or listen in another way)?! It will not be a live broadcast from the concert hall, or will it be, we will have to check, but there will undoubtedly be a broadcast at noon, as there is every year. Perhaps not of the St Matthew Passion, but of the St John Passion - so that we at least maintain together that effect from the past. That not everything falls away from us. And if you don't like that, if you think: I don't feel like Bach and I don't feel like religion either, can't we agree that we will buy eggs and that we will paint our eggs in an artistic way before Easter. That is also a tradition, something from the past, which really does have a deeper meaning, whereby you at least make sure that you do not forget that we are in the process of living towards a feast that does not only have a meaning for the religious population, but that has always had a meaning for the entire culture, so much so that we get an extra day off work for it. It must be possible to offer a counterbalance to what the government, the state, is sending at us, namely a complete isolation from the outer world and a forgetting of what the year actually is. When we try to place ourselves back in that, in that course that runs through the year, where there are highlights, where we know from the past that we have something to celebrate, even if we cannot do it with the whole family, but have to do it in a different way, let us do it anyway. Let's not lead ourselves to cut off everything that has value in our lives and that comes from the past, to chop it off as if you never had it. That is what my resilience told me, and in the end it is like this: if you look at it from a Christian point of view - and by Christian I do not mean ecclesiastical Christian, but essentially Christian - if you look at it from that point of view, then you can say that we owe our resilience as human beings to that very Easter celebration, that we celebrate this there. When things are not going well, we don't get depressed and throw the towel into the ring, but we feel within ourselves that I am more than the circumstances. And from that more than the circumstances, I stand up, I may resurrect!

Future predictions abound, but the past seems to have to be swept away by Mieke Mosmuller
Comments